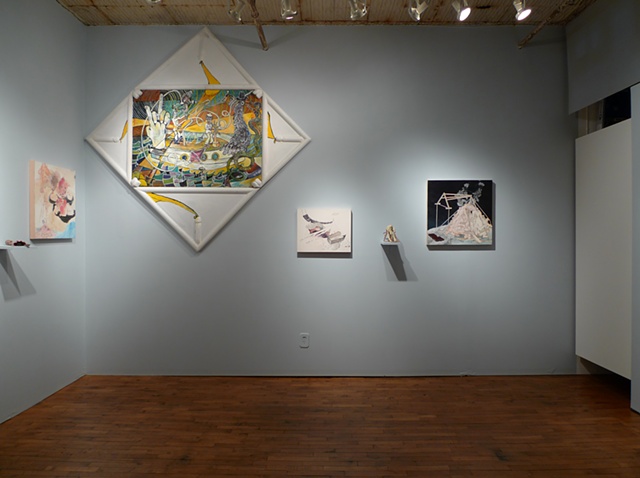 By observing and logging the essences, behaviors, and appearances of others and myself, I study the peculiarities of individuals, to one another as well as to their environments. From this stock of my own wonders concerning our world and it's inhabitants, my works portray personifications of our human abject experiences, which embody abnormal physical and psychological states. These abnormalities of existence manifest from the interplay of ourselves in our ordinary capacity, versus the occurrences of our daily internal fantasy lives. Fantasy, referring to our mind, soul and body's intangible, yet real and deep felt phantom world, not sensed by others. These internal phantoms range from our darkest desires and fears, to uncertainties of time, the fragility of life and what lies beyond this existence. I am fascinated with the mental forms that are conjured up from what we experience within pondering universal phenomenons. Each of my characters and landscapes, as well as their operations, is the representation of these fancies as well as the emotional reactions and bodily sensations that occur from having these flights of imagination. It is not where you are or what you are physically doing in the real world that I am interested in, rather your perceptions of where real life places you in your mind's landscape, who you are and what you are doing there. This is what I am interested in recreating.

With every scenario I introduce another cast of psychic doppelgangers, fusing together their personalities from a curious inventory of psychoanalytic readings, humiliations, and self-deprecating humor. The works are initially understood as playful, humorous, even beautiful at times, but upon closer observation they reveal true terror and discomfort. Through my allegory of human behavior the viewer is given another realm of reality through my perceptions of what is irrefutable that is often felt but not seen. Thus, through the lens of my own experiences and observations, I direct the viewers’ visions to the complex, deep-level, make-up of who we are, and make us dwell on what we are- the abject human.

Kymia Nawabi, a first-generation Iranian-American, was born in San Diego, CA and raised in Durham, NC. Nawabi is a multi-disciplinary artist working in drawing, painting, sculpture and short stop-motion animation film. She received her MFA (2006) in drawing and painting from the University of Florida, and her BFA (2003) in drawing and painting from East Carolina University. Kymia currently lives and works in New York, NY.

Nawabi’s work is a marvel, upon viewing her works vastly ranging in size and media; she takes the viewer on a grand tour of extreme psychic visions with almost hallucinogenic power. Her illustrations of her delusions are designed to heighten the viewers’ human ness and actuality. By cobbling together an ever-growing vocabulary of psychoanalytic metaphors, visual puns, and classical drawing skills, Kymia reinvents herself with each effort, for the drawings are a strange sort of self-portraiture. With each work she introduces new themes of transformations through deconstructions of normality. From a wall of exquisite sketchbook drawings and works on paper mounted to box-panel frames, to a parade of miniature sculptures, onto a series of grand, out-sized drawings, as well as stop motion animated short films- Kymia Nawabi amazes, entertains and deeply unsettles us as we participate in her visions inspired from her biography. Nawabi was recently invited to be one of the artists to showcase her work in a two-person show in 2011 at SUGAR Gallery, in Bushwick, NY. This past year, Kymia also received a NYFA (New York Foundation for the Arts) grant for drawing and was awarded her second Swing Space Residency with the Lower Manhattan Cultural Council. She has been a visiting artist at ECU in 2009, as well as at Westchester Community College, in Valhalla, NY, in support of her work in the group show, Tragic Sense of Life, 2010. In 2009 among many group shows, her work was exhibited at the Queens Museum, International Biennial, as well as at Aljira during her Emerge 10 fellowship and residency in Newark, NJ. Come August 2011, an original sketchbook of Kymia Nawabi's will become part of the permanent collection at The Brooklyn Art Library and more works can be seen at the Drawing Center’s Viewing Program in NYC.