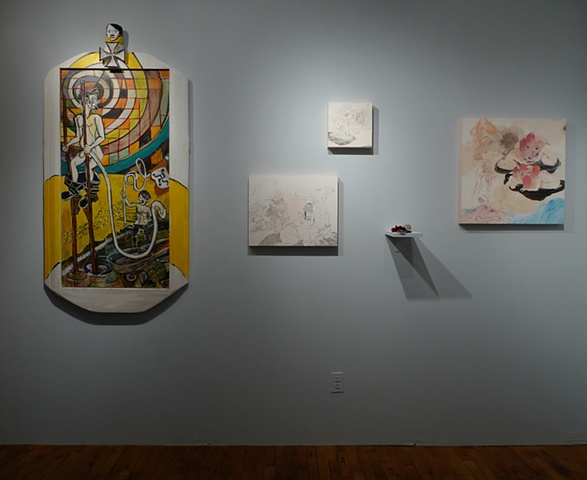 American historical painting has, for the most part, always been about ideals and ideal realities. Americana is an ideal representation of the glory of us. Through this device painting is frequently pressed into the service of some perceived “good” to our society. I think of the happy slaves one sees romping through their chores at the splendid home of George Washington. I can promise you all there is such a painting. It hangs at the Metropolitan Museum of Art. I did not paint it, of course, but it is as much a product of lies as any thing I ever dreamt up. Such a painting not only tells the “story of George Washington,” it supports an ideal social order that many Americans are comfortable with. Think of pious Christian mothers free from the struggles and trials of women, or walls filled with images of those soldiers who do not bleed, but walk eternally towards the glory of battle. Our national story is made clean by means of these symbolic realities. Our history is thereby esponged of the lessons hidden in its tragedy. This may be seen as the noble lie that Plato spoke of. Years ago, while I was attending a funeral reception, an old friend commented on his horror at seeing two men kiss. He went further to express his contempt for gay marriage. The whole time he was speaking his children played in front of a blaring television. On the T.V screen were images of the burnt bodies of two men hanging from a bridge. The Iraq war was decent enough for his children, but sex never! It was then that I began to really wonder; what could be making so many people blind? Violence is all around and few people act to stop it. Very few people curse and oppose violence the way they oppose equality for gays. People speak out on somber occasions, organize voter referendums, and scream all night in churches to stop sex. The fact that American children are being shot on the way to school proves my point. There are limits on who can see sex, still more limits on who can buy or sell sex. However, anybody can buy a gun in most places. I am convinced that no amount of depicting violence as it is would cause reflection or even discussion. My work uses sexual imagery as a form of protest. I have asked myself, “Is a dick in somebody else’s ass worse than a child being shot on the way to school?”

Sick Semper Tyranus (Shown at SUGAR in 2010): “Sic Semper Tyranus” is what John Wilkes Booth shouted as he murdered Abraham Lincoln. In my Painting Mr. Booth is absent. Instead I depict Mr. Lincoln, and the rugged frontiersman Davy Crocket, double teaming a Black woman in front of a rustic log cabin. As I worked the painting I realized that the original small penises weakened both the composition and narrative of the painting, so I decided to render the first of many snake cocks. The carved figure was built sometime after the completion of this painting; I reasoned that the use of real sculptural space combined with the theatrical qualities of my painting would create a more dramatic piece. I felt that the result was much more confrontational and aggressive. When this piece first showed in Indianapolis, (Town Hall Meeting exhibit) the public was clearly charmed. A steady stream of visitors left comments about my works ability to offend Jesus. Meanwhile something like three people are murdered in Indianapolis everyday. So few “cheeks” are turned in my home town, yet I was flattered that Jesus found time to hate my paintings.