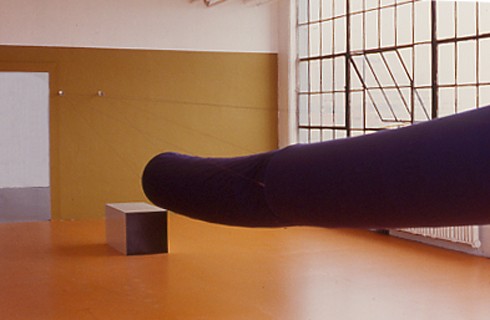 The roots of SUGAR are grounded in installation art. In the mid nineties I began to explore this art form, coming from an architectural technology background I was more interested in space and environments.

"The air up there. I would be the first to admit that such vague lyrical folderol may suggest nothing to most folks. My aesthetic love may blind me: Obvious emptiness looks full to me and the very air smells sweeter when it is, after all, just air. Call it an acquired taste--but everyone needs some taste for air. And for those who prefer it a bit more gregarious, there is Gwendolyn's installation. Called The Play Tunnel, it consist of green painted walls, an orange floor, a largish white rectangular block with one black end and a very long blue-fabric tube suspended in midair by guy wires. Perhaps needless to say, the tube stands in sizzling contrast to the walls and floor. The wires, tied to the far wall, give it sort of "speed-line" momentum. So, when the tube terminates against a clear plastic panel inset in the wall of windows at its other end, there is a sense of great movement suddenly, surprisingly stopped.

In this case, the subject seems to be, again, the air, the emptiness, the consciousness of sky drawn into the room, delivered as color, brought to the floor by the visual weight of that block, then recycled up to be exhaled back outside--all in visual metaphor, of course. It is in short, a great magical execu-toy of visual dynamics. It is a twin-cousin to Gwendolyn's last installation (Newton's Cradle), in which almost the very same visual structure embodied a row of bowling balls that did, indeed, swing against each other like an industrial-scale toy. But now Gwendolyn has gone a giant step beyond the merely mechanical. Now, all movement is implied rather than real. She moves the same weight, perhaps even more, aided only by the visual energy provided by a few lines and a burst of color.

And in that she has stepped into illusion, into magic---the heart of art and so much better than machinery." above: The Play Tunnel