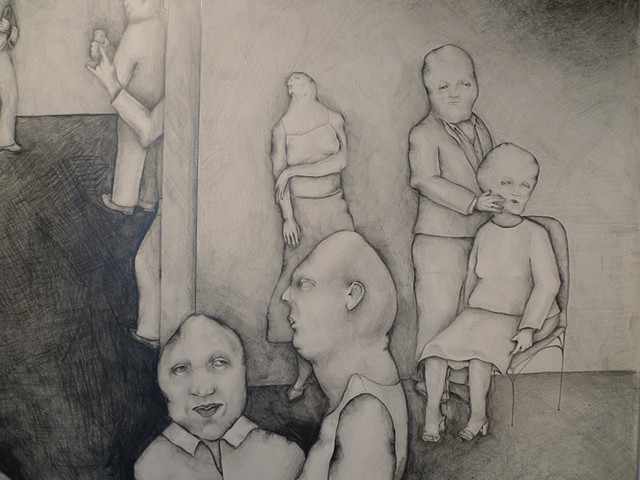 I attended my Aunts wedding in 1998 and later in 2003 when I first came to New York I made drawings based on photographs of this event. It was significant because my Aunt had an Elvis impersonator at her wedding reception. The impersonator made his own homemade costume, when I made the sculpture I found that pattern he used-- he was charming, he was real, not a professional/Los Vegas rhinestone impersonator-- a simple Leeds, AL guy. He became a character repeated in the drawing series. In those drawings I started exploring characters-- and it was the first time I was looking at flash photography at social gatherings and studying every body/facial structure picking and choosing features that would lend itself to creating my people.

These people, drawings and sculptures, I called them "Fetal People" -- the idea that they were in some kind of physical evolution/regression as if they all said, "I'd like another stem cell cocktail." So they are hairless, liquefied people-- all the busts I did for PS1, underneath their hair, they are all lumpy and liquefied, I didn't stop making them, I just put some hair on the busts to try that out and it was very powerful to add more real things to the work. The couple in the drawing and sculptures, not only was I thinking that I was revealing something about a psychological state between two people (that there was something wrong..in the drawing the woman is grabbing her leg cringing, yet has an apparent ecstasy/perhaps prescription drug expression on her face-- and in the sculpture she is bound by her outfit with a blank look...)

It's like the masks have been removed and you can see what is really going on with these people-- they have become aliens in a way.. The sculpture of the woman sitting..she is telling you about something, and it's as if she's being revealed for how she really feels or how she feels about you the viewer-- a strange state of happiness and horror. And the idealized bald girl she was, I'll admit, a "B side" piece where I wanted to make "Royals" -- people that were idealized, as if they existed in an anti gravity state--- the opposite of the "Fetal People" There are 3 other pieces in the "Fetal People" Disney DnasaB has two and unfortunately another one of those pieces may be lost-- the owner of that one died last year (a hair stylist who I traded art for hairdos).